Home of the Pride

Arizona Superintendent of Public Instruction Kathy Hoffman and Phoenix Mayor Kate Gallego rallied fourth graders, their parents and staff at Ed and Verma Pastor Elementary in Phoenix today, highlighting the importance of participating in the 2020 Census and its direct impact on Arizona schools, especially in traditionally undercounted communities.

Obtaining an accurate count in the U.S. Census is critical to schools, which benefit from the more than $20.5 billion in federal funding distributed to Arizona annually for school nutrition programs, early intervention for children with disabilities, Head Start, school infrastructure projects and more. Distribution of this funding to Arizona and to communities through the state is tied to the decennial census count.

“Our schools rely on millions of dollars tied to the census, so it is crucial we have a complete and accurate count of all Arizonans - not just adults but kids too,” said Superintendent Hoffman. “The 2020 Census will help shape the face of education in Arizona for the next decade, so let’s ensure that all Arizona schools get their fair share.”

A highlight of the day’s event was a group of fourth-graders sharing what they think Arizona will look like in 2030, during the next U.S. Census. The video will be part of a 2020 Census Time Capsule project by the school’s 4th grade classes, housed in the Office of the Governor until 2030. Video of their answers is available here.

“U.S. Census-related funding provides critical support to many school-based programs,” said Debbie Johnson, Chair of the Arizona Complete Count Committee. “We’re proud to partner with federal, state and local partners to raise awareness around the importance of the 2020 Census, especially among our traditionally undercounted populations like our youth.”’

The decennial census determines the distribution of more than $675 billion in federal funding to states. Just a 1-percent undercount of Arizonans could result in an annual loss of $62 million or $620 million over the next decade. Self-response to the 2020 Census begins on March 12, online, by phone or mail, when the majority of Arizona households will receive an invitation to respond. #KidsCount #AZCensus 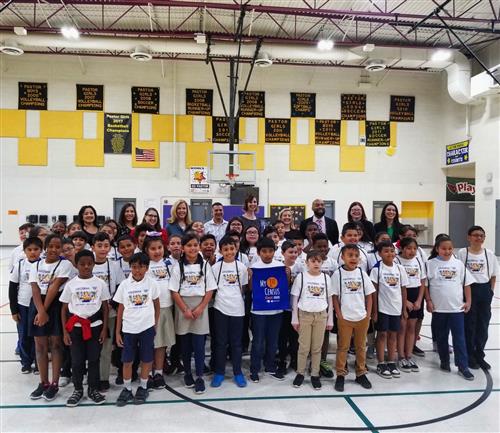 You can add a copyright statement or legal disclaimer in this area if necessary.
Copyright © 2002-2021 Blackboard, Inc. All rights reserved.